Are You Seen As Authentic? 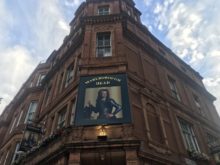 While in London recently, my wife and I visited some pubs.  These old bars are obviously old, established and English.  They belong there.  They scream of authenticity.  Take a look at the picture I took of one a block off Oxford Street I saw while my wife was shopping nearby.

I bring this up because a pub that looks like that one belongs in London.  No one would question that.  It's expected.  However, if you build and open a pub like that in Miami, my hometown, it looks made up.  It doesn't look believable.  Unless you sell it like a fairy tale Disney made up attraction, no one will buy it.  Nothing in Miami is that old or English.

I bring this up because it's important that people perceive us and our businesses as authentic.  If there's even a hint that something is off, that's going to cost you.  People will notice the gap, even if it's really small, and begin to wonder, "Why is something off?"  It sets off an unconscious sixth sense you don't want to set up.

When people run into you or your business, they get an impression.  You have to really explore that and anticipate the questions it brings up in people's minds.  A fat, out-of-shape physical trainer immediately raises a red flag in people's heads.  A pet groomer that has no pets or seems to dislike dogs is the same.

I've run into flavors of this and thought I would share with you a few examples.

I've run into people at networking events that can't tell you in even 10 minutes what they do.  It might be they're good at what they do, but they can't articulate.  It sounds like they're a consult, but then they aren't.  They explain some sort of problem they address, but then they go off on a tangent that you can't follow.  Not only do I not have time, but I'm left thinking, "Is this person hiding something?"  That's not good.

A lot of this has to do with the story we tell or it could be the story we don't tell.  People will fill in the blank with a misunderstanding if you don't make it clear to them.  I worked in Pittsburgh on a project years back and there was a lunch place I'd walk by with a sign saying they served Cuban Midnight Sandwiches.  Now I'm a Miami native and Cuban too.  I know a good Midnight Sandwich when I get one.  After a few weeks walking by the place, I decided to stop and ask.  I was a little suspicious which is not good.

When I walked in, I asked about the Cuban sandwich and why in Pittsburgh would they be promoting it.  The story was intriguing.  The owner, who was clearly NOT Hispanic, had spent some time in Miami and had learned to love those sandwiches.  When he opened his restaurant, he researched the bread, which is key for a good sandwich, and got his hands on a Miami bakery recipe for it.  He then looked for a bakery in Pittsburgh that could supply it.  He insisted that the bread had to be fresh.  He didn't want to put out a Midnight Sandwich that wasn't done right.  I had my taste and the guy did a decent job.

I bring this example up because something like that in a place that doesn't look Cuban, served by a guy that's not Hispanic in Pittsburgh seems out of place.  It raises the red flag.  If the sign said something like, "Ask us how we learned to make great Midnight Sandwiches?" it would have addressed my concerns.  It would have also peeked my curiosity.

So please keep in mind.  You have to address the issues you and your business bring up in people's minds.  There are things that don't go together and need explaining.  If you are seen as not authentic, you are starting down the road to not being truthful which is never good.  Business is hard enough without that.

What Do Your Customer's Need? Ask Them.

15 Great Ideas for Promoting Your Content to Drive Leads

Are You Telling the Story Your Prospects Want to Hear?

It's FREE and full of the resources and support all first time course builders need.