Declaration by an Unfit Runner 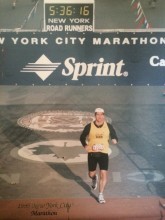 I ran four miles this morning and feel really good.  I don’t say this bragging.  Those that know me know I’ve:

To snap out of it, I met with Coach Yvo in early August. She’s a long time friend who’s now a certified running coach.  My plan was to hire her starting early September to get me prepped for a Miami Half Marathon early next year.  Her assignment to me was to start with some easy 2 to 4 milers 4 to 6 times a week in August preparing to start with her in September.

You know, the first week was pretty good.  Week two was bad and I never recovered.  Work got in the way, the heat (Miami August is brutal), more work, wine with dinner, old age (it hurts even saying that), enjoying life…you know the drill.  Every excuse came and the joy, mental health and physical benefits were no where to be found.

Come early September, I was no more ready to start with Coach than I was in July.  Why the struggle if I really enjoy getting out there?  Well life just happens and runners aren’t ways great runners.  (Notice I still call myself a runner, but one that isn’t behaving like one.)

So here’s what happens.  My wife and I were talking with my friend Raul about visiting San Diego.  We’ve taken a real liking to that town and have friends with a place there.  We do our best to go out there when we get a chance.    So Raul calls me yesterday and says, “Let’s sign up to run the San Diego Marathon. We’ll both sign up with Coach Yvo and get back out there.”

This was the push I needed. Not only am I signing up, but I’m putting it out there.  Here it is on this blog, in writing and posted all over social media.  I’m doing it.

Now I’m not a racer of sorts.  I’m at my best cruising at 11:30 to 12 minute pace.  I’m about 20lbs over weight.  But here’s my goal.  I’m shooting for a 4:30 San Diego Marathon next June.  (BTW, if you’ve never run that race, it’s one of the best ones for beauty, nice course and great weather.) I’m going to get my weight down under 200.  I haven’t seen that weight since I crossed into my 50s a few years back. And I’m going to start enjoying my runs again.

This morning, the weather was Miami fall hot meaning it was maybe 5 degrees cooler than July and August hot.  I went out easy finishing my four miler at a 12:30 pace.  Not a record breaker, but I was out there enjoying it. I took pictures of our local peacock flock. (Yes, in Miami we have those birds hanging out.)  Now I’m feeling that good ache and I’m ready to get out there again for a few more of these in the coming weeks.

Keep me honest everyone and let me know how many of you out there have been in a funk like this and what snapped them out of it.

How to Make Sure Website Notifications Make it to the Inbox

How Do We Offer What We Know in a Completely Different Way?

Why Your Free Consultation Offer Sucks (And How To Fix It!)

Are You Telling the Story Your Prospects Want to Hear?